And, of course, we cannot support farms where children have to work! See More about worldwide child labor

When we were visiting farms in Yirgacheffe, Ethiopia’s top coffee area, we saw many kids working on these farms. Mostly they separated defected beans and did some minor works at the washing stations.
Why do the children not attend school?
We talked to them, their mothers, and farmers to get more background information on this terrible situation.
As already found out on coffee farms in Central America and on our past travels to Kenya and Tanzania, people are all facing the same problem and only a few of the farmers and co-operatives found a preferable solution. 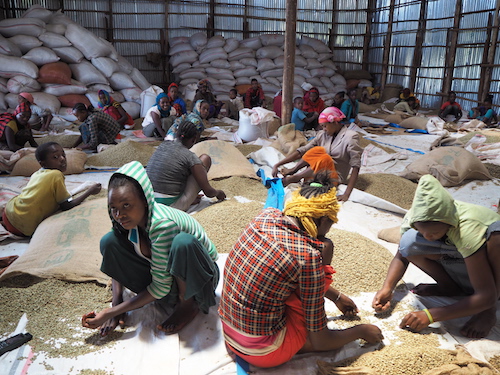 A mother, working at a coffee farm near Shakisso, told us that she has four kids from 6 to 12 years and not one of them attends school. We found the youngest two girls also working at the farm, selecting defected beans.
By strolling around and taking pictures we tried to start a conversation, which was quite tricky as we do not speak Amharic, their mother language. With help from our driver and a farmworker, we found out, that the kids just hang around and help their mothers because of the lack of alternatives.
This means, their mothers have to bring the youngest kids with them to the farm as they are not old enough to be left alone at home (as the other children do). So, they start by playing around in the area and little by little they help their mothers as they get bored without a playground and playfellows on site. Then the children find out that they work nearly as efficient as their mothers and a kind of pride is created. An undesirable circle starts.*) 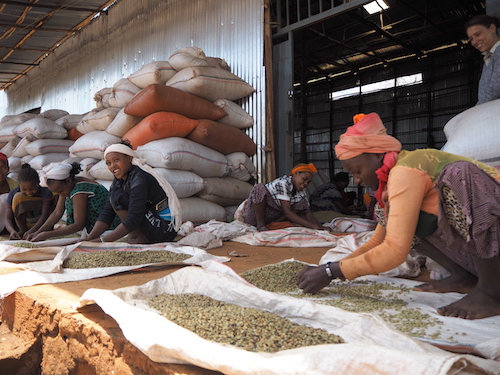 We met with Kayla Nolan, the director of the US-based NGO „girls gotta run” in Ethiopia’s capital Addis Ababa and discussed this topic. She told us that this mother is not a single case, it’s very common in the Ethiopian countryside. When the kids are still babies, it’s easy. They are laying around and sleep most of the time. When the children start running, the problems start as well because kinder gardens and child care are very rare and not every family has grandparents for help. Some kids aren’t physically strong enough to walk the long distances to the schools and in many areas, simply no schools can be found. With some nomad tribes (as we have seen with the tribe of the Masai in Kenya and Tanzania in the last years) we face the problem, that the whole family travels for harvest (not only for coffee – also for other agricultural products) from region to region and the children get educated by the oldest or from seasonal nomad schools on a very basic standard.

What to do with the children?
Kayla told us, that there is still not enough money and sometimes also not the will to build schools. On the other hand, also the families are not always happy when one of their children is not available for farm work – especially when the poor harvests of the last two years need every single hand to feed the family. And in some cultures (especially in the southwestern area of Ethiopia) a girl is a good investment because when she gets married, her father receives 25 cows and some land from her husband. So why investing in education, especially in education for girls? 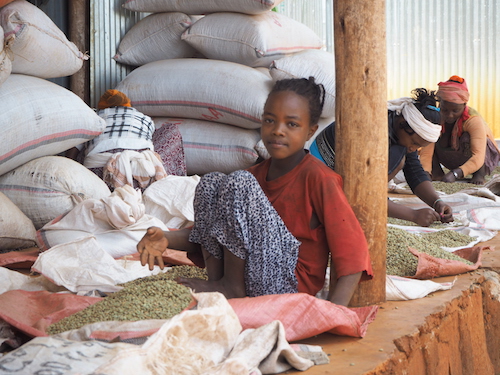 Is there a solution or will we find child labor also in the future?
Kayla told us about their project which is, of course, a small help for the big problem, but as we decided, it’s really worth to support. The “girls gotta run foundation“ (GGR) started to engage young girls in sports by using the national sports of Ethiopia – running. World famous marathon runners are coming from the highlands of Ethiopia – the same area as the coffee originates. In this project, GGR encourages the girls to find new goals and creates a vivid environment for them. Sport is a helping hand creating awareness for education and personal development.
As small support to this idea, CoffeePirates decided to invest in this project by buying coffee from this area (Rocko Mountain Reserve – natural), where every single kilo brings donations to GGR and together with our charity organization frangle.org we can support this project directly.
We are not able to build schools – this is the work of the Ethiopian government – but we can do little things to help the local communities. On our travels and coffee scouting’s we always look behind the curtains, we ask the workers about their daily life. Of course, it is easier when we can talk to them directly as in Central America but also in Africa we are able to find ways to communicate. And we decide to buy coffees not only by quality but by looking in the faces of the workers and in the meantime we can see how they are treated on the first look!